I’m sorry I’ve been gone so long, it’s been about 4 months!!! and I have thought of this blog often during that time and yet couldn’t muster the energy, inspiration, courage to come back to my blog. But a few nights ago I put today into my diary as the day I would return, even if it’s just for a quick “hello, I’m still here!”

What have I been doing? Well there was Christmas, the kids went to visit Santa at his Bach (that’s a kiwi holiday home by the beach) and Santa was in his shorts and t-shirt, it was lots of fun for the kids, we put up the tree, opened presents and spend time with Grandma, Grandpa and the girls’ two aunts. END_OF_DOCUMENT_TOKEN_TO_BE_REPLACED

One of my favourite things about gifting, is the gift wrapping of course. And I have been spoilt for choice

END_OF_DOCUMENT_TOKEN_TO_BE_REPLACED

Today May took part in the Glenfield Parade. It’s the first time we have been a part of this parade END_OF_DOCUMENT_TOKEN_TO_BE_REPLACED

I have been very busy getting back on track with my Christmas crafts.

I only discovered pinterest a few months ago but as Christmas approaches it has taken over my life a little. It’s like unending stream of eye candy
END_OF_DOCUMENT_TOKEN_TO_BE_REPLACED

May has gone back to school today, so regular blogging can continue. I’ve managed to do quite a bit of sewing END_OF_DOCUMENT_TOKEN_TO_BE_REPLACED

Cushla’s Village Fabrics is probably my first conscious introduction to the world of quilts and patchwork.

Before I was first drawn to their shop (when it was still on Clarence St), I didn’t even know what a quilt was. END_OF_DOCUMENT_TOKEN_TO_BE_REPLACED

I am making two animal pouches, one for each of my sisters as part of their Christmas present.

These pouches were inspired by Kajsa Wikman’s animal pouches which you can find at her Etsy Shop. They are also featured in her book, Scandinavian Stitches.

Here’s a picture of some of her animal pouches:

I love her colour combinations.

Her pouches are 15 x 17 cm. Mine will be a bit smaller. I am making mini ones, to store ATM card and a bit of money. Also because they are smaller, my zipper will have to go on the side instead of the top, so it’s easier to get stuff in and out of the pouch.

Last night after the kids have gone to sleep, I took out my fabric stash and started selecting some fabrics for my two pouches. My sisters have quite different personalities.

My middle sister is very feminine, she tends to favour vintage style and soft pinks. So I came up with this, the green and purple backdrop may seem a bit dark, but it gets lightened up with the little pink dress of the bunny. My sister’s chinese animal sign is the rabbit, hence I picked a bunny for her pouch. 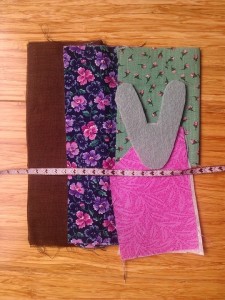 My baby sister has more modern tastes, she likes to keep up with the fashion trends and delights in fresh bright colours. I wanted to give her a pouch with a burst of colour that ties in with the summer and beach theme of the handbag (that I have yet to start work on). Her animal sign is the horse.

Here they are after I joined up the “wallpapered” back drop. I wasn’t happy with the horse head, so I played around with her a bit more. 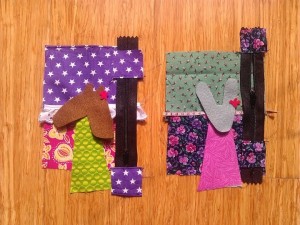 And here’s the finished product: 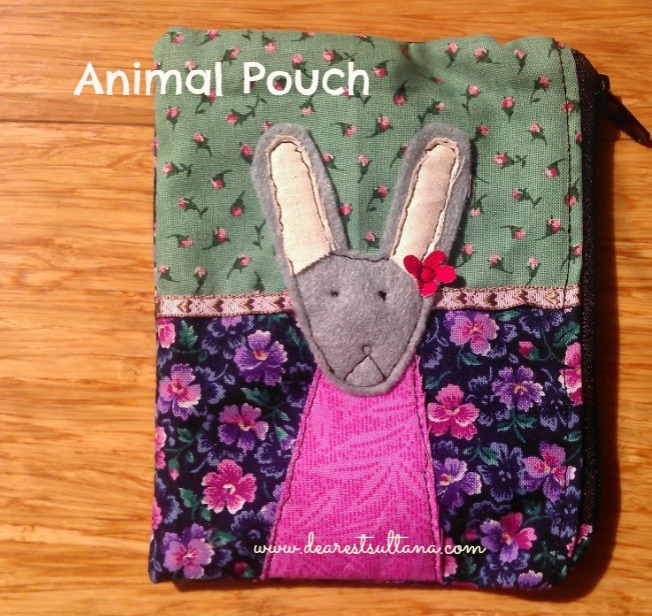 That horse head still looks funny… I’m happy with the rabbit though and I like the size, just right for a few notes and cards.

Standard
Dearest Sultana,
We had a beautiful day this Father’s day. Although it was a little chilly, the sun was out, the skies were blue, it was fantastic especially after the week we just had (rain almost everyday). The girls woke their daddy up with lots of kisses and cuddles and home made cards. Then we took out his other presents. I think he was very pleased with his presents. In fact he put up the framed up collage of his fishing photos straight away. With nails into the wall! It usually takes us much deliberation before we put nails into the wall.
For breakfast we had fried bananas (pisang goreng) fried up with the new deep fryer. Believe it or not, it was the first time the girls had fried bananas. Fried bananas are a common street food in Indonesia, and they are very very delicious! They are just fried up bananas in batter, but there are many variations to the kind of banana and batter. My mother in law makes the best fried bananas, better than any bought ones. Unfortunately the kind of bananas that are used for this are quite uncommon in NZ, so we rarely have them here. For this occasion I just used regular bananas  and they turned soft very quickly, they were still very delicious but not nearly as good as my mother in law’s original version.
Later on, we went out to visit some friends and in the evening had dinner at a local chinese restaurant with my parents and sister. The girls wished their Grandpa a “Happy Father’s Day” and June insisted on sitting next to him (and kept pinching his rice!). All in all, a great Father’s Day! Only thing marring it, I think, was the lack of kayak fishing, even though it was a beautiful day on shore, the sea forecast was less favourable, but not to worry, Tuesday’s forecast is very positive and I’m looking forward to some fish for the new deep fryer. I’ll post up some pictures if his catch is good.
I thought I’d share some of my applique pieces for my Christmas gifts project.

I really wanted to try to incorporate some of these into a simple project. A tissue holder seemed small and simple enough. And if it was up to snuff, I could include it as a Christmas present.

My tissue holder was inspired by this new Kleenex product. I like that it opens up. 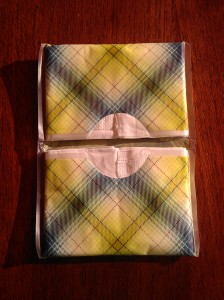 This was my first attempt:

I like the colours but I didn’t insert the lining correctly.

I had to think it through a little more and made a little practice one and then attempted it again. 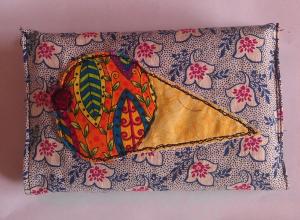 Finally a bit of time to go on a shopping trip to look for fabric for my bag project.

June and I drove to Newmarket right after we dropped off May. I was looking at getting some upholstery fabric for the bags because I wanted something sturdier than the quilting fabric that I usually get.

I have been to these shops before and the fabric selection is amazing. First stop Martha’s fabrics. It is a pretty big shop with a huge range.

I wasn’t exactly sure what I was looking for. I wanted something quite happy and summery but nothing too busy that will compete with my applique pieces. They had a lot of geometric type fabrics at the moment and I thought those would work quite well but nothing really caught my eye.

In the end I bought this lovely green linen with birds and birdcages on it. This one will be for mum’s present. Mum’s favourite colour is green and as I grow older I am also drawn to it more and more. There is something soothing and comforting in a nice dark green colour. I am planning to make her a bag in the style of the Harrods bag. 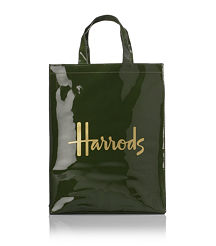 She has had a bag of this style for as long as I can remember and her current one is beginning to look a little worn out. I’m also planning to make a semi circular coin purse with some of the remnant fabric.

Next I went to AB fabrics. Their selection is a bit more of the flowery and stripes variety but still lots of lovely pieces. If I was making a country style bag, I would probably find something here. They also have a nice children’s selection.

I almost left the shop empty handed when I came across a vibrant bright blue fabric. Perfect!

I am so pleased with my finds today.

Dearest Sultana,
I’ve had such a productive morning! Dropped off May at school, then drove straight to the local library and picked up the book’s I’ve ordered. I’ve put down an order for quite a few bag making books, to get ideas for the bags I’ll be making for my Christmas pressies.
Here they are:

I’ll tell you more about them once I’ve had a skim through. They also had a Peppa Pig DVD we haven’t watched yet. So that will be a little treat for the girls.
I always get so excited when my book orders arrive and almost rush down to pick them up immediately. I love our local library system. Ever since the councils in Auckland city were amalgamated into one central council, all the libraries have effectively been merged which means I can order any book in any of the 52 libraries. It is rare for me to search for a book and not find it in their system. And the service is free!
While at the library, we joined the Rhymetime session, June did some singing and dancing, and there was some story telling. Today it was “We are going on a Bear Hunt” and by the time we got home… she was all set for her nap.
Here is a picture of something May drew in school last week:

My favourite thing is to go to the bookshop

I love this! And I love that that is her favourite thing. When I was little, I don’t think I’ve ever been to a library. I’m not sure why. I know Mum used to tell me lots of stories, mostly verbally, sometimes from books. Mum was a great story teller (still is), and even when she tells them from books, she would make up the story, so the story changes everytime she tells it. She tells lovely stories to my two munchkins now. Maybe libraries were just not accessible where I grew up. So I make it a point to take the girls to the library, we usually go at least once a week.
We have a lovely library in Birkenhead. It has the best views of the city from it’s giant glass windows and a beautiful children’s section. There are often activities on offer and a little playground right outside.
Recently May has been interested in Pippi Longstocking by Astrid Lindgren. She watched it as a play a few months back with Grandma and we discussed how when I was her age I used to love Pippi Longstocking too. We ordered a book from the library and it finally arrived about a week ago. We’ve been slowly reading through it during our bedtime story. Did you know that it was published in 1945! Wow, I had no idea! Even when I was little, it was already a classic. 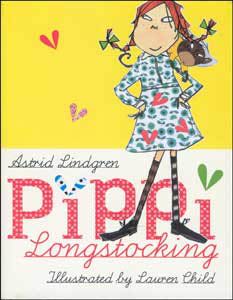 Before Pippi Longstocking, May was really into fairy tales, she didn’t really care for them earlier, but when her German grandparents were here, they introduced these to her and we’ve been reading the same fairy tales with lots of different variations for months. So I’m rather pleased that she is now interested in something new. Although I’m sure that we will always return to Fairy Tales and their variations. 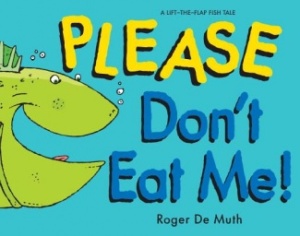 June loves books about fish, whenever her Daddy comes home from his fishing trips, she must inspect his catch and whenever she sees any fish (dead or alive or on print), she will call them Daddy’s fish. This is one of our favourite’s, Please Don’t Eat Me by Roger de Muth. 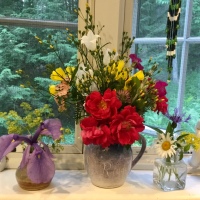 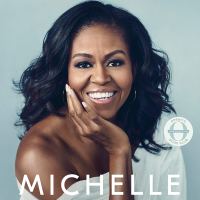 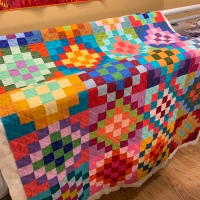